I’m just returning to the Command Post from Indianapolis and participating in the 2015 NFDA Convention Expo.  The event from all perspectives and those that I came in contact with as well as in my not so humble opinion, was outstanding.  As a buyer (funeral home owner-partner), a vendor, media (Funeral Nation TV) and attendee seeking to broaden my funeral industry knowledge/education, I must say this was probably the best that I have ever attended.

As an attendee, the venue in Indianapolis at the Indiana Convention Center with close proximity of hotels and restaurants (and the weather was great too) made navigation easy.  The Convention Center itself was perfectly laid out for easy transitions from the Expo floor and Educational Seminars.  The events I attended (Welcome Reception, Funeral Service Foundation & International Forum & Reception) were held at locations close by and those in attendance were provided royal treatment.

I was able to attend some of the seminars and I was privy to conversations from attendees about several presentations of which were all positive.  The speakers ranged from best seller authors, funeral service superlatives and others providing engaging, relevant content.  Although, there was quite a post convention discussion among some regarding the need for more embalming related sessions.  With this said, I think I’ll reach out for more information on this particular line of thought with an interview on Funeral Nation TV in the near future.

As predicted, there were copious amounts of the traditional “funeral ware,” product and service vendors.  One of my curiosities coming to the Expo was how Matthews and Aurora would be presented, especially in such a short time frame since acquisition.  I was frankly impressed with what I found; two separate booth spaces showing products and services of newly minted Matthews Aurora Funeral Solutions:

Sometimes I am accused of being biased in my blog posts, so in all fairness I want to also show the booth of my friends at Batesville from the exact same angle and view perspective as the photos taken above.  Of course, I can’t help myself from wondering if this is a wall that Trump has in mind for our borders or simply a way to keep The Funeral Commander from breaching the perimeter from an unmanned entry point:

I did see a few interesting new caskets on the show floor and this may come as a shock, but there were urns on just about every isle adding to the already over saturated market. Yes I saw some standouts, but you’ll have to stay tuned until next week when on Episode #4 of Funeral Nation TV airs.  The tattoo removal guys, see thru caskets and Thomas the Train were on the floor…trust me on this one, you are going to want to see what we saw and view highlighted first time vendors.  All vendors that I chatted with were very pleased with the traffic to their booths.

I was pleasantly surprised to see the integration of technology into practically every facet of our business.  Insurance providers like Homesteaders Life Company, the 2015 NFDA Innovation Award winners Answering Service for Directors and niche companies like Funeral Research & Insight with their Family Satisfaction Key Driver program all showing technology geared to assisting funeral directors.   Technology companies like FrontRunner, FuneralTech, and FuneralOne continue to bring fascinating new offerings to the marketplace also assisting funeral home operations as well as connectivity to the families served.  A little shout out to my friend John Heald and the Legacy.com team that for the second year in a row they were making “glamour shots” at their booth.  Although they didn’t have a lot to work with in the image below, it was fun and a brilliant marketing idea: 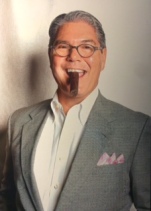 The most important aspect of #NFDA2015 was the opportunity to connect with longtime friends, meet face to face with our “social media friends” and make new friends.  The funeral industry is globally smaller than you would imagine.  I had cigars and libations with guys from Israel that place cremated remains or hair from the deceased in the Holy Land (I originally met them in China), guys from Spain that have created a new cremation/lifestory/columbarium product and an urn manufacturer/artist from Russia.  There was representation from the US Navy & Marine Corps Mortuary Affairs unit and I connected with a guy that I served alongside in Desert Storm.  At such a large event in a small industry, you never know who you may come across (I even talked with someone from the Republic of New Jersey, with interpreter of course).

In summation, if you were blessed to attend and participate in #NFDA2015, I cannot fathom anything that could be said other than “kudos.”  If you missed it please visit the websites linked above.  MAKE SURE and look for Episode #4 of Funeral Nation TV next Tuesday (October 27th) for some interesting highlights.  From the Command Post and through a thick cloud of cigar smoke, Cheers Y’all!  #thefuneralcommander