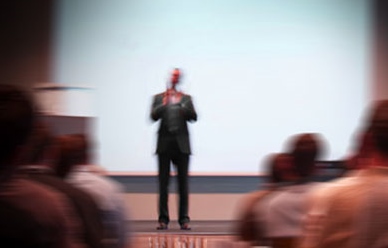 I recently attended an outstanding funeral business seminar during which my “different from the obvious” observation skills kicked in.  The speakers were offering transformational information about essential elements of funeral business from addressing consumers in arrangements to profitability.  As I intently listened to the content provided by experts in our profession, my focus shifted to those in attendance.

And in my innate smart-assed sense of being, it hit me; the messengers are pleading for action of the attendees.  Interaction, response, nodding of heads, raising hands all to provide the speaker acknowledgement their message is resonating.  A funeral seminar (or other seminars for that matter) may be just like attending church or going to a strip club.  As a note, I have been in more churches than strip clubs in my life, neither of which seem to have made a difference in my life.  What are the similarities?

Seminars, churches, and strip clubs all want their seats full.  At most funeral seminars and strip clubs, you have to pay to get in to see the talent.  Churches offer free admittance but generally collect early on before the best of the content is delivered.  The talent (or presenter) does their best to get the attention of the attendees with jokes, graphics, compelling content, or some other form of mesmerizing skill.

Where the attendees sit is interesting.  Those that are eager to participate generally sit up front.  The front row folks interact with the talent in different forms from verbal affirmation to throwing money.  They also hope to reap rewards like being called on for a response or getting some type of goodie like a t-shirt, candy, or recognition by the presenter. The front rowers also don’t mind getting heckled a bit either.

Those in the middle want to hear what’s being said, but not make too much of a commitment.  The “middle crowd” dips their toes in the participation water by taking copious notes, occasionally raising their hands and show relative interest without being subject to singled out…unless the presenter is mobile and happens to venture into their “safe space.”

The most skeptical seem to sit in the back.  Their modus operand (what they do for folks of non-legal knowledge) is to watch what everyone else does and not live in fear of participating or being called upon.  Unfortunately, the skeptical also miss out sometimes on the true flavor and essence of the talent. This particular behavior is evident in funeral seminars, churches, and strip clubs alike. Oh, and don’t forget, rarely are photos made of those in the back and they have the best angle of a quick departure if necessary.

Lastly, and most interesting to me, the content has not changed.  At funeral seminars the presenters share why funeral professionals should up their game by focusing more on the ‘business of doing business” and how to correlate the desires of the families they are serving with their P&L rather than inane subjects like the all-important matching tie debate.  At church, the presenter shares how changing behaviors and thoughts lead to a better life lived.  At strip clubs, the presenter shares how life may be lived differently, albeit a fantasy not reality, and it pretty much has a cost for continued thoughts usually a dollar at a time.

In closing, whether a seminar, a church, or strip club, messages are being delivered for attendees to take action.  The physical location of the attendee may be a sign of whether just notes are taken, participation level engaged, or serious action may be taken.  Different observations, but the correlation of reception is relevant. As long as there is a need, there will be messengers attempting to change lives, good or bad.

From the Command Post (West) and chuckling a bit about the responses, Cheers Y’all! #thefuneralcommander 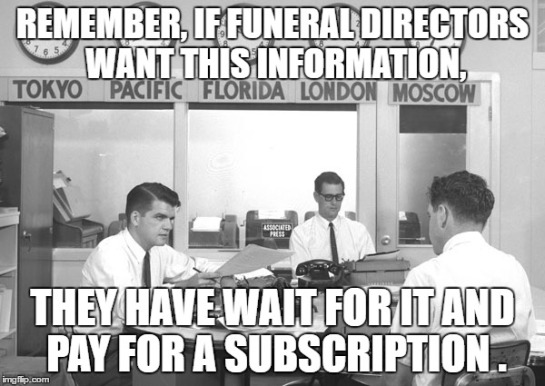 As a funeral business consultant, I scour internet articles and search for relevant business content that is industry specific.  Interesting, but not surprising little fresh content is available for the masses regarding funeral or cemetery business.  Try yourself; google funeral business news.  The top of the page is none other than www.connectingdirectors.com which is no surprise.  Frankly, that’s the only accessible site for daily funeral and cemetery news at one location.  Everyone else in the space demands payment or a subscription. I do believe the effort necessary to create and deliver in-depth content, a fee should be charged to access the information because of the expense to produce such work. Not everything you read should be free.

But from a different angle of “how to,” let’s dig a little deeper. What if you were a funeral home owner wanting information on particular subjects, let’s say “how to reduce accounts receivable for funeral homes?” Go ahead, Google it.  There are a few articles that pop up including yours truly Funeral Director Training: Failed Payment Policy is on the Owner’s Shoulders and  Funeral Director Training: When is the pain too much? .  Still, there is no one easily accessible collection point for professionals to conduct research or “study up.”

Wouldn’t it be great to have volumes of relevant funeral and cemetery business content at your fingertips without having to subscribe or dig thorough printed magazines for articles? What if, and this is a big one, I hate to use Dan Isard’s most hated F word, but let me state it here: THE CONTENT WAS FREE?

Of course, there is a point to this post.  As a loyal follower of The Funeral Commander you know I have a purpose for my penetrating questions and provocative prose.  Friends, there is good news and I’ll give you a little whisper in this season of joy: there is new innovation on the horizon.  It will offer a new way of sharing business content that can be implemented to make your business better.

Yep, it’s a magical time of the year and The Funeral Commander is busy innovating and creating.  Be on the lookout…more to come.  From the Command Post (West) and yes, a thick fog of cigar smoke, Cheers Y’all! #thefuneralcommader